During AirVenture 2012 we were up on the balcony to give an interview for EAA radio when this massive storm suddenly came rolling through. Everybody got wet, the airshow got cancelled. Umbrellas, tents, little kids, and a cat or two were flying through the air, but no planes… except for the few ultralights that flipped on their backs unfortunately. 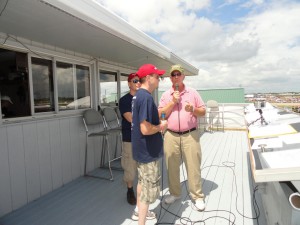 The interview was suspended which initially was disappointing but nobody was listening to our jokes anyways during the storm. Vendors were running after their tables and precious beer was spilled.

Taking shelter high up in the EAA radio building we got to see the whole action created by the weather event and as a result this strip was invented. A day or two later we got to come up on the balcony again during much better weather to finish the interview and had a blast.