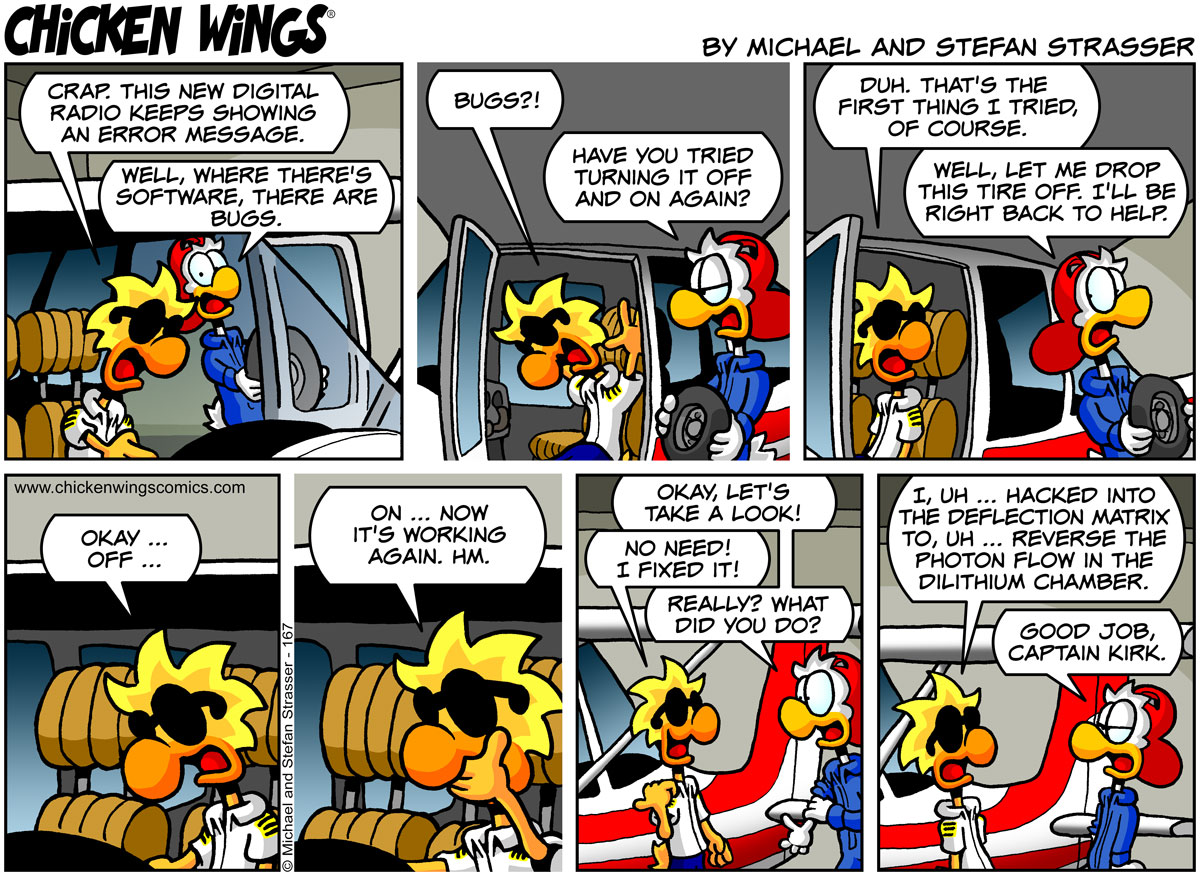 Home › Comic › Where there’s software, there are bugs

Where there’s software, there are bugs

Here is a funny story that fits perfectly with this strip. Recently I was able to talk a friend of mine, who shall not be named, into a tour of an F-35 Lighting hangar at a base that shall not be named. I wasn’t allowed to take any pictures, and most of my questions about the aircraft weren’t answered because of security reasons, but boy, was this thing impressive to see up close! Of course, it is full glass as well. The cockpit itself is almost not very impressive because of it. When nothing is turned on inside, it is really just a bunch of dark screens and not even any back-up steam gauges to look at. Screens on top of computers, on top of more computers, on top of black boxes. My request to turn the thing on and maybe take it around the patch was denied for some odd reason.

What I did find out about it is, that it seems most of their faults and issues are some sort of computer glitches. There is just so much going on electronically just to make this thing fly, let alone deal with weapons systems.

And now, guess what fixes most of their issues and squawks they have after each flight? They are powering everything off, reset a few things, and reboot it. He tried to explain it and it sounded very complicated, but I had him dumb it down a little for me and this is what it comes down to:

In short, to fix most of the issues on the most advanced fighter jet on the planet, they literally turn it off and then back on again!!

Also, I just want to mention we had a lot of fun at the Zoom-Mixer and we really want to do this again. Thanks to everyone who tuned in, we love you! For the next meeting, I have the following thought/question: Do you guys just want to find a time/date and just meet, or would you prefer some kind of agenda? We can have Stefan talk you through the animation process, or I could do a presentation about the Chinook and/or firefighting, or a Q&A kind of thing of questions you always wanted to ask us …

Let us know and we’ll get together again soon either way.

8 comments on “Where there’s software, there are bugs”