We are in the VERY EARLY planning stages of the next book. A lot will change this time, the printer, the format, some logistical and technical issues behind the scenes will be fixed, but fear not Chuck and Julio will stay the same. But we have come to the first big hurdle: 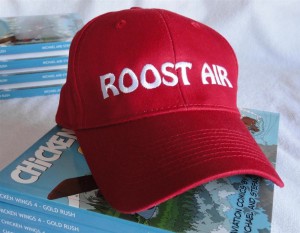 One thing Stef and I can’t agree on at the moment is what will be on the cover of the next book. SHould we do more chickens? less chickens? more planes? less planes? put the Corsair on the cover again which has been suggested before numerous times. We are confused and undecided, and on top of that DIVIDED!

We need you guys as a tie-breaker! So we thought we would turn it into yet another contest/raffle. Write us what you think would be funny, or cool, or awesome on the next cover. We will then raffle off 2 “Roost Air” hats from your entries. Multiple entries are allowed since we want as many ideas as possible.

And we will let you know where the hats go in a week from now on Wednesday the 16th.